Coming down to the wire...have the visa finally (a ten year visa!) after a trip into DC, and the plane tickets. The seats are terrible, but then I have a lot of work to do anyway, preparing additional lectures. Down now to the stage we always go through when preparing for significant travel: the TO DO List and the TO BUY list.

The TO DO of course includes things like call the bank so they don't decline my Credit/ATM cards; make sure all the bills that come do while I am gone are paid; water the house plants and make sure that the garden is under some sort of control (and put a link on the Garden Smarts site noting that I will not be maintaining it in my absence).

Tomorrow will be the final packing...launch from Bakerton at 5 am on Saturday, which is not really a problem since I am used to getting up for the farmers market anyway (had to do three weeks of ads ahead of time and give them to Fiona and Todd).

Pretty unstressed about the whole thing as there are people at the other end (Chengdu and Kunming) who are making all the arrangements. I pretty much just have to show up!

A friend from Shepherdstown posted this  hilarious clip of The Donald:

YouTube video of The Donald chanting his China Mantra.

Do hate getting up at 5 am, though. Fantastic sleeping weather...rooster crowing, etc., etc.

But launch we must! On to Dulles, On to San Fran, Off to Chengdu, Donner & Blitzen... 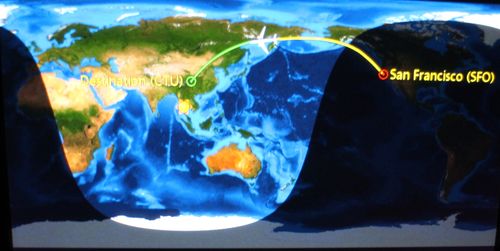 I am now in Chengdu...24 hours after leaving DC. The flight(s) were uneventful, though there was a delay in SF and so I arrived shortly after the scheduled time.

Ms Sun, who has been my contact and will be my translator, was waiting at the airport and all went smoothly. We start the program tomorrow at 9 am local time.

Unfortunately I cannot log in to my Gmail account (Great Firewall?) so I cannot communicate directly with my particulars, and I apologize; I am looking into VPNs or perhaps creating a new and temporary email account to stay in touch. 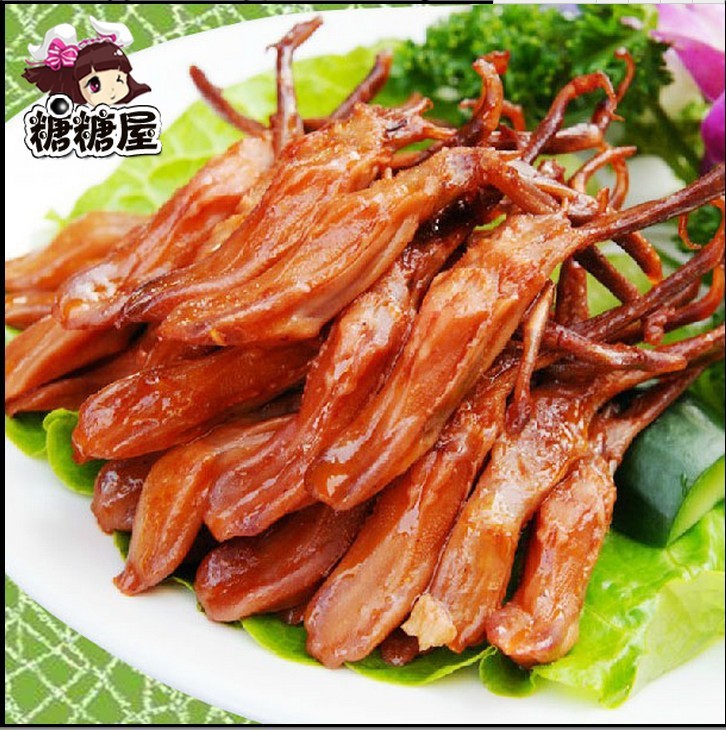 Here is a link to the photo gallery of products for sale at the Lek Shi downtown farmers market (one of many I am sure). The pix are mostly of things you won't see in the States, and I have tried to identify them where I can...

No I am not talking about the bricks and mortar thing built on the northern border to keep out the invading hordes on horseback, but the the virtual wall built to keep resident citizens from accessing Google, or Yahoo, or Facebook or YouTube (or more than two thousand other websites).

It took me a couple of days to figure out how to beat it but it hasn't been easy, especially since I am changing hotels daily and on the road dawn to dusk visiting far flung sites with a bunch of friends and colleagues from the hort trade. (I have also absorbed quite a bit of Chinese culture and cultural history!)

It has only been two days in country, but a lot of has happened, and a lot of ground covered...and I'll try to catch up on it after dinner tonight. I did manage to get my photos from the camera to the laptop and that should add a little fun to it -- especially the Lek shi farmers market this morning -- just a block from our hotel, the four star Xin Peng!

Saturday morning my translator Sherry and I visited the Wenshu Monastery and then wandered the streets surrounding, buying gifts and talking. We happened upon this street market, which had an incredible array of mushrooms as well as other items. Check it out.

Even today was totally consumed, but that was because of the graciousness of my hosts. Even though I switched from "foreign expert" to "tourist" this morning (and shot off my Modern Farmer article that was promised a week ago) my handler Sherry was with me all day. 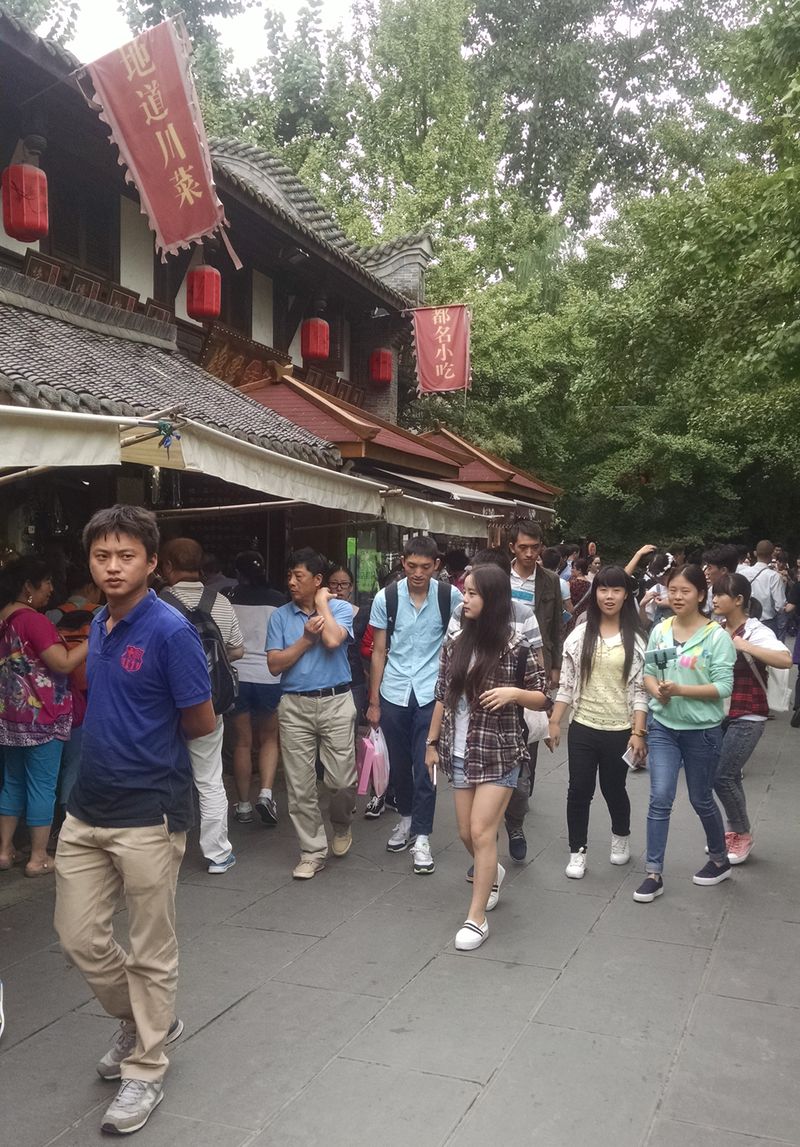 It was a shopping day, getting presents for all the home folk (more to do in Kunming where I land tomorrow) and she saved me immense amounts of Yuan by haggling in the home language. Most of the stuff was bought at the Asia Mall, a touristy place near the Tibetan neighborhood I will choose to stay in if I am able to return.

She is a wonderful person (seen lurking behind me in the photo posted on Facebook after the lecture at the Agriculture academy) who turned me on both to the VPN that has allowed me to get back in touch and the Chinese / English smartphone app that is allowing me to communicate with the locals in her absence.

Theoretically I will have tomorrow afternoon off and will be able to do a little catching up, so look for back-dated posts covering the week in Chengdu ... especially the food. Think you have had Szechuan food in a Chinese restaurant? Dream on.

It's been just under a week, but it seems I have my chops back (sticks that is). Spent the last couple of hours at the big family dinner for my friend Rongna Liang, who was the inspiration -- and the sparkplug -- for this whole trip.

Check out this spread: 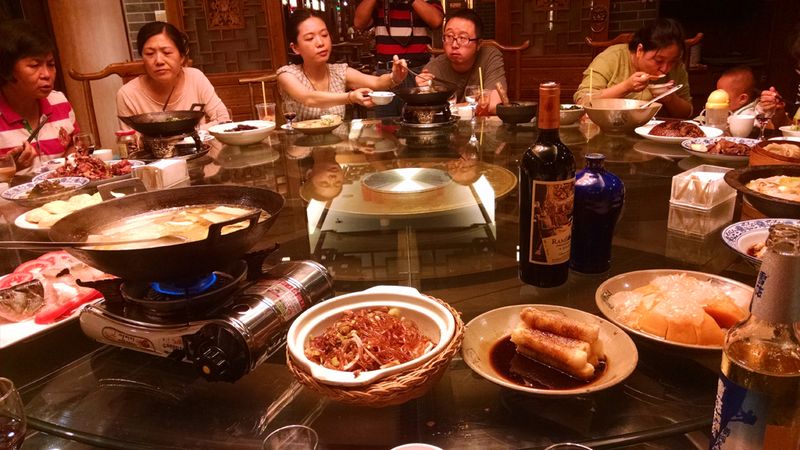 Its all what I have come to know as the social round table. That is the most striking difference I have noticed about China versus the US: they are very social people while we are very isolated people (this is aside from the fact that it seems they will eat just about anything).

This dinner was a little more sedate than some of those put on by my hosts: no pickled duck tongue, or chiffonaded pig stomach, nor either thin sliced pig snout or ear crisps, just your basic hotter than hell veggies and meats with soups and white rice.

After dinner I had to negotiate a cab ride to the airport (46 Yuan, or $7.50) where I am staying in a runway-side hotel for the night. Not even unpacking...just a hit and run.

The food court at the Asia Mall, such as it was, had a wide variety of choices including deep fried octopus (with head up and tentacles splayed in a perfect star pattern). I passed on that, but my eye was caught by the shrimps...and next to them the rabbit heads (it was Sherry that identified them for me). 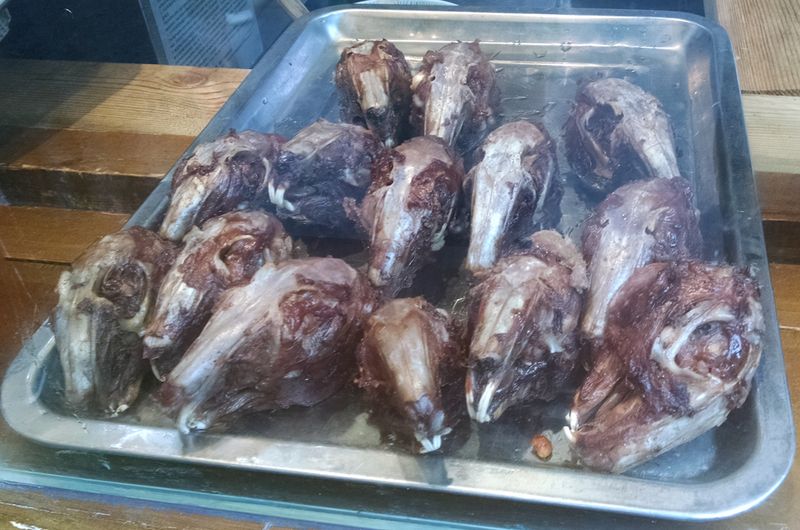 Ummm, boy!  Later in the day, after visiting the Wenshu Monastery, we cruised the surrounding streets and came upon a sort of farmers market that had an incredible and unusual lineup. More on that in another post, and I hope to put up a photo gallery of the place...

Made it to airport without incident, and check in was no problem once I figured out the Chinese menu on the ticket machine. Just as quick and easy as the States. And the security line was not more than 10-15 minutes despite the enormous crowds here on a Sunday morning.

The metal in my ankle still does not seem to set off any of these machines (I have been through a dozen or so since the surgery). Oddly, they did not ask me to take off my (money) belt, but they did want to scan my wallet. And they put my carryon through twice before asking me to open it.

Anyone who is concerned about airport safety outside the US (and especially in the Second and Third worlds) is living in a dream world – the American Bubble. I went through American security twice on the way to China without incident, but here in Chengdu they found a pair of (prohibited) scissors deep in the “emergency pack” that Diane had packed for me, complete with medicines for anything short of appendicitis and a sewing kit…that included scissors! They were polite about the whole thing, and of course I just blamed it on her, smiled Shepishly, and I was on my way. 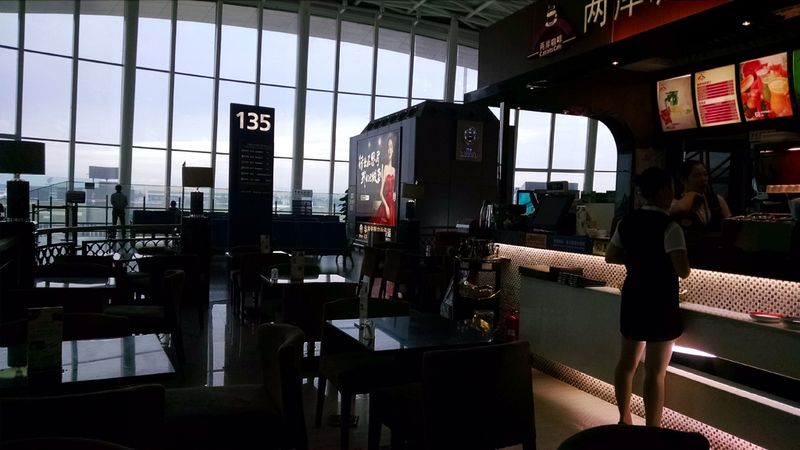 Sitting now at a café near the departure gate hoping the weather is clearer south of here as I lucked out and got a window seat. I wish I was on the right hand (Himalayan) side, but I’ll take whatever view I can get on the 90 min flight out of these sweaty lowlands – look at a topo of the Sichuan Basin where Chengdu sits – and into the cooler highlands.

Will be met by a Mr. Ma, who is to be my host for the next four days (the four after that I am on my own). Then it is back home from Chengdu, though I have not booked the ride back to there, as I am not sure if I want to fly or take the 19 hour train ride and see things from ground level.

Will keep you posted as best I can.

Am scrambling to make the 7:00 am airport shuttle. Had about 10 minutes for breakfast: boiled egg, some potatoes (!) plus some green beans and pickled cucumber with garlic (not to mention the requisite melon). Had to pass on the coffee, as it was the same as at the Chengdu Hotel, which is to say a fifty-fifty mix of Nescafe instant and powdered milk. The tea was good though. 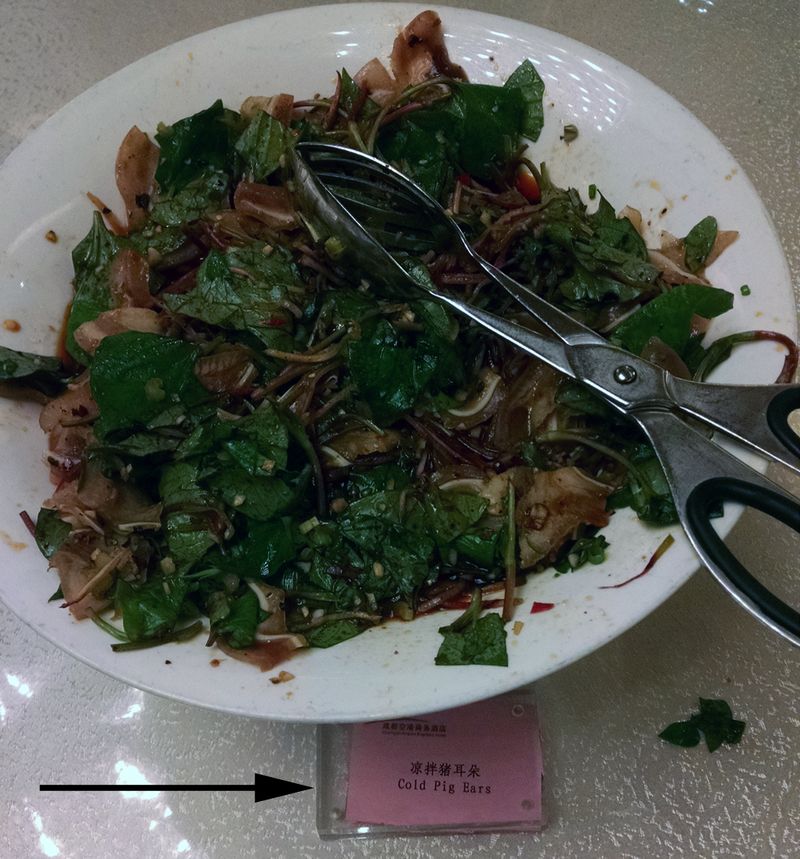 I also decided to pass on the “Cold Pig Ears” as they seemed a bit heavy early in the morning. Now maybe a pig foot .THAT I could do!

Made it to the hotel in Kunming by lunchtime. There was a little mixup in that my host took me to this really flashy marble and mirror place where they did not seem to have my name on the list. In the end it turned out that the "hotel complex" included this new international posh-posh and its older brethren across the way a couple of hundred yards, which is where I ended up.

Truth be told I am happier over here. It is a classic mild climate place, a ring of three stories (no elevator) around a central courtyard full of mature philodendron and bananas and such, with sitting nooks among them (and WiFi). 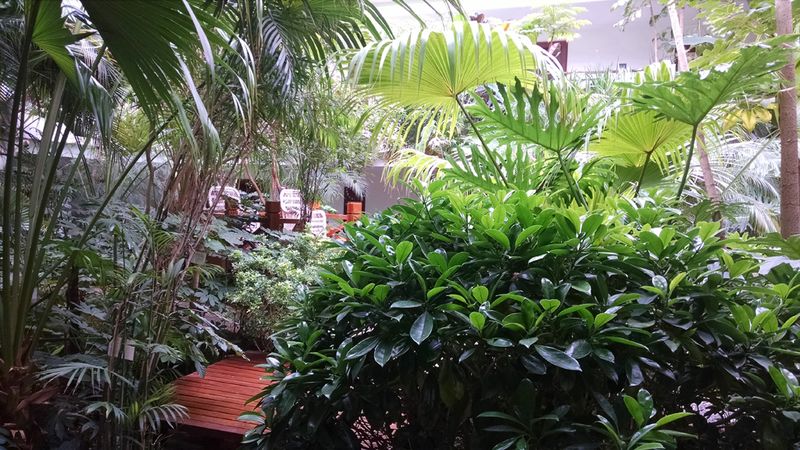 A little worn around the edges perhaps, but a solid internet connection, "leave me alone" ambiance, and no flashy types in their shiny Eurocars.

Out the back, through my ten foot window I can see across our fence (below me...I can't see it) is some sort of compound centered around a shrine...in fact a monk just came around the right side, swiping his robes back up toward his elbows. 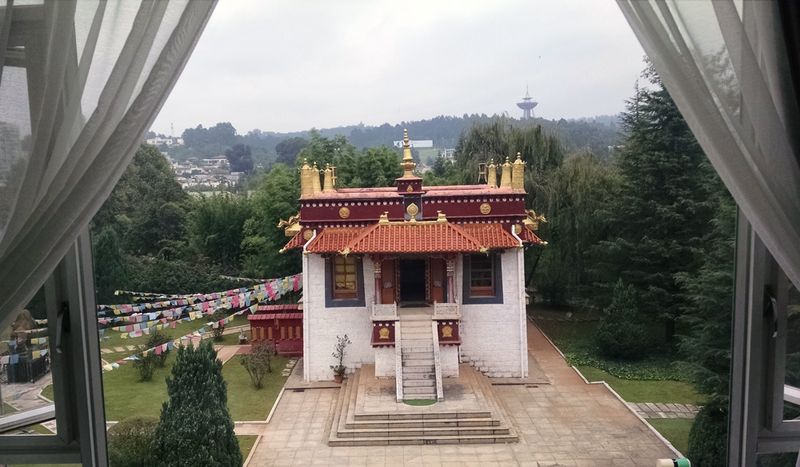 Four days? No problem. No traffic, no moving every day, no handlers and drivers....just the mellow Mr. Ma, who was driving 80 clicks down the middle of the 120 click expressway in from the airport, young daughter in the back seat, trying out her English on me and desperately wanting to pull the rollaboard suitcase from the parking lot to registration. A real change from Chengdu! 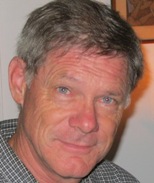